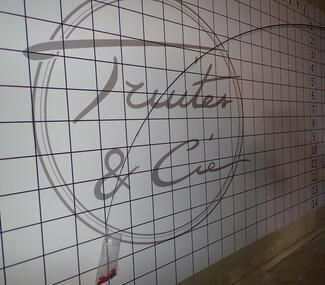 The action of a rod is always a source of discussion filled with rich vocabulary, but too often misunderstood or misused. If you add to that a good dose of marketing, anglers are lost. However, there are measurement systems that can characterise a rod or a blank and can be of great help during a purchase. For Trout & Co, it was unthinkable to carry out rod tests without relying on a precise and reproducible protocol.

Since the information provided by the manufacturers is often not very informative (fast action, progressive, parabolic, fast progressive, fast but soft, extra-fast...), it seems appropriate to implement scientific tests in order to obtain objective numerical information.

The Common Cents System (CCS) method was developed for this purpose by Dr. William "Bill" Hanneman and published in the American magazine RodMaker Magazine in the early 2000s. This is the protocol that will be used by Trout & Co when testing fly rods.

The CCS approach makes it possible to characterise the action simply and objectively, the power and the reactivity of a rod, and therefore to compare different models in an informative way. We will not describe the protocol in detail here, because it would be extremely long, but we will still explain the main principles and especially define the vocabulary used.

A fishing rod is characterised by 5 main measurable parameters:

The first two are easily measured with basic equipment (a tape-measure and a scale), but for the last three, it's a little more complicated…

Other parameters, such as sensitivity, are difficult to quantify and therefore often appear subjective.

The starting assumption of the CCS states that a rod is loaded when, fixed by its grip on a horizontal support, its tip has moved vertically down one third of the total length.

The power of the rod (Intrinsic Power) then corresponds to the mass needed to make this movement happen.

Furthermore, the rod being loaded this way, the angle formed by the tip and the horizontal axis (Action Angle) will determine the action.

The reactivity, called frequency (Frequency) in the CCS system, is the ability of the rod to oscillate more or less quickly when it is loaded. It's an indication of the best casting time of the rod (for example, high frequency will require a fast casting motion)

But by the way... Why the hell is this method called the Common Cents System? Well, simply because Dr. Hanneman found it convenient to use American 1 cent coins as a unit of weight to load the rods.

To learn more about the Common Cents System :

The power of a fly rod is usually expressed by the AFTMA line number that can load the rod (the heavier the line, the more its number increases): in the CCS, the power is determined by loading the rod with the help of 1 cent coins, then a conversion table will convert the number of coins used into a value called the Effective Rod Number (ERN). The ERN will be considered the ideal AFTMA line number for this rod.

But unlike what a manufacturer can write on a rod to indicate its power (a line number), the ERN is not a whole value. A rod with an ERN of 5.8 will be considered a "5 powered rod", knowing that it will be very close to a "line 6" with an ERN of 6.2, for example.

The action of a fly rod depends on its design method and therefore on the relative bending capacities of its different sections. There are usually 3 types of action for fly rods: 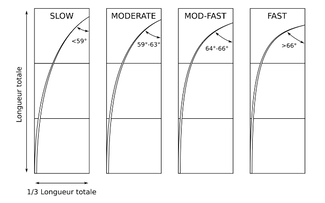 This value is named Action Angle (AA) and the selected sections are:

The frequency (CCF, for Common Cents Frequency) of a rod corresponds to the number of oscillations per minute that the tip can carry out when loaded with a specific mass provided by the protocol. It greatly depends on the length of the rod and the weight of the mass attached to the end of it, but also the materials used in the manufacturing of the rod.

One would be tempted to say that a rod that carries out a large number of oscillations per minute will be "fast". Definitely not ! Because the terms "fast" or "slow" are reserved for the characterisation of the Action. We will have to make do with the value of the CCF and talk of high or low frequency.

A high CCF value is a very reactive rod, which demands a fast tempo during casting movements. Conversely, a low frequency rod will require a slower tempo.

And the weight, then?

In fact, the CCS does not take weight into account. At least not directly. The weight of the rod will partly influence the value of the CCF (a heavier tip will decrease the frequency), but excess weight on the grip's side will have no noticeable influence on the indicators of the CCS.

That said, the weight of a rod and the balance of a rod/reel ensemble are considered by many to be a major criteria in their decision-making at the time of purchase. At the end of a long day of fishing, whether with your rod high when euronymphing or by casting a dryfly, the fatigue felt by the angler will depend directly on the weight and balance of the ensemble.

For each rod tested, we will obviously specify its actual weight, but we have also chosen to introduce two additional indicators:

- Balanced Reel Weight (BRW): it is the weight of the spooled reel which makes it possible to balance the ensemble at the very top of the cork of the grip, where in theory will come to rest the angler's index finger.

- Balanced total weight (BTW): it is simply the weight of the rod and the BRW combined. This weight is therefore that of an ensemble that we consider to be "balanced".

The BTW is particularly informative for nymph rods longer than 10' because this notion of balance becomes critical for these important lengths, and in particular it impacts the comfort of fishing. This parameter is much more informative than the weight of the rod alone. Indeed, the difference in weight between two rods is generally that of a few tens of ounces... while the difference in weight of BTW can be several ounces !

Obviously, these measurements determine the choice of reel your rod requires to be balanced. 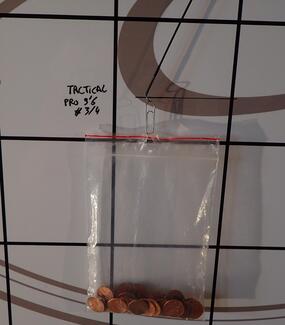 The rod is fixed horizontally by the grip on a fixed support.

The horizontality of the rod is checked using a spirit level, and a plastic bag is suspended by the top ring thanks to a paper clip (the weight of the ensemble will be neglected).

The plastic bag is then filled with 1 cent coins so as to lower the tip by one third of the total length of the rod.

The number of 1 cent coins present in the bag is called Intrinsic Power (IP).Thanks to the Rosetta Stone table, this value is converted into ERN, which is the ideal line number.

Example: If the bag contains 31 coins, the ERN has a value of 3.57. The ideal line number for the rod is therefore 3.

Before charging the rod, a long, ultra-light stem is attached to the end of the tip (half a piece of uncooked spaghetti is the ideal tool for this). The angle AA is read by the specific "action analyser" indicator placed behind the rod so that the baseline is horizontal (verified by a spirit level) and the end of the stem fixed to the rod goes through the source of the indicator. We chose to read the angle by adding a tangent to the tip, just like in the following photo: 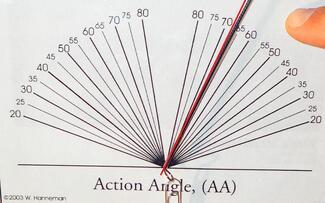 The rod being firmly fixed horizontally by the grip, a weight is attached to the end of the tip just before the top guide. This weight is defined by the CCS according to the previously calculated ERN. The weight of the adhesive tape required for attachment is neglected. The rod is then manually loaded again and the tip is abruptly released from the constraint. It then starts to oscillate vertically up and down. The scene is filmed, which allows a posteriori to determine with great precision the time T (seconds) necessary to carry out 20 oscillations.

The CCF is then calculated using the following formula :

A very light reel is installed on the rod and a plastic bag is attached on to the reel. The bag is filled gradually until the ensemble is balanced underneath the extremity of the cork of the grip, where the angler normally holds the rod in fishing action. 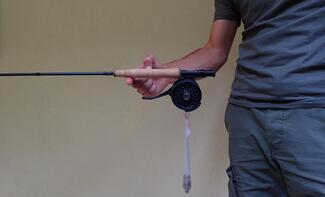 On top of these "calculated" indicators, we will provide simple indicators such as the actual weight of the rod, its number of guides, the type of reel seat, the distance of the stripper guide or even the number of pieces.

Distance of the stripper guide:

Measured from the end of the grip, the distance separating the grip from the stripper guide greatly influences the creation of a slack line, especially when euronymphing. Obviously, the greater this distance, the more the line tends to go back down the guides. On the contrary, a short distance is much more comfortable in fishing because it facilitates the recovery of the slack line, when euronymphing, for example.

The look (finish, type of decoration), components (guides, reel seat, ...) and various characteristics (dimensions of the grip, fighting butt) of each model will be described in a concrete and objective manner. Special attention will be given to the reel seat : downlocking models provide a better balance.

For each rod tested by Trout & Co, the results will be presented in the form of a table containing the following data:

To learn more about the Common Cents System: 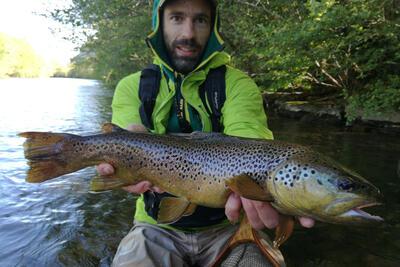 Pierre Lavignotte
For Pierre, fishing is a family legacy. As soon as he can stand up with a rod in hand, his father and grand father teach him the basics. First with coarse fishing in the…
[See full profile] 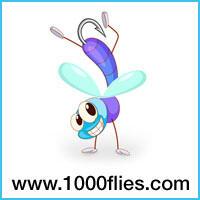 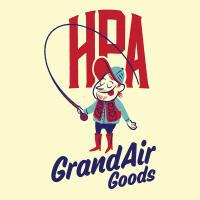 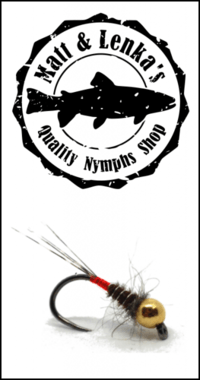 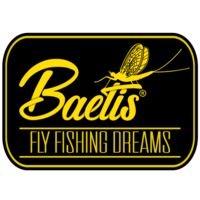